Isolation, biodiversity & health to ‘get the job done’: triggers in food (in)security.

Food security is a complex topic, which has been inspiring a greater volume of research in recent times. This article outlines just three of them, from different perspectives, about how isolation, biodiversity and fundamental health impact nutrition (in)security in farming environments.

It outlines research from South Africa, Mexico and the Autonomous Region of Bougainville summarising the following elements of isolation, proactive biodiversity and impact on health, and a reflection on how this influences my research.

Firstly, South African research demonstrates how individual farm workers can be in danger of food insecurity due to being outside a network of information about resources and need to rely on shop keepers and farm owners to help connect them to resources. Secondly, research from Mexico shows how  coffee farmers can be proactive with biodiverse planting of maize and beans before the wet season to ensure that they have enough food when hard weather fronts move in and make them inaccessible to normal resources. Then thirdly, the research from Bougainville outlines farmer health and the role of what farm work and individual health is and can be focused on to ensure a sustainable community of healthy members.

Farm workers are isolated and thus have an increased risk at being food insecure.

Research from Claasen and Lemke (2019) in South Africa focusing on 561 farm workers who were belonged, in part to  54 social networks to identify what type of food security existed for people who worked on farms (not farm owners). The research was found that farm workers were moderately food insecure across the board, and that their social network was mostly kin-related and within a radius of 50km of where they lived. Claasen and Lemke concluded that these workers, often forgotten in research and social economic policy, don’t have access to resources which might be available socially or from municipalities because they are on the ‘fringe’ of society; especially the agri-community. The research suggests that local shops and farm owners can help bridge this gap and be an information - sharing hub more for those who work daily labour jobs on farms. Within our cacao farming training we have a segment specifically training cacao farm owners about managing their labour teams, and until this research, I had not considered the role of them being a conduit of information especially about access to local resources. This was a good nudge for my thinking about included it in farmer training on the segment of managing team.

In Mexico, Fernandez and Méndez (2019)  in the Sierra Madre de Chiapas mountain range which has 5 different biosphere reserves and studied coffee farming families in the region and the role of biodiversity of the farm on their food security.  Working with one of the coffee cooperatives in the region which had 400 members living in 30 communities which become very remote during the wet season with roads and access cut off due to landslides and difficult road conditions. Thus, food security at such times of the year is highly important and the cooperative has worked to develop and resilience and proactive approach to being prepared for self-sufficiency and autonomy regarding food supplies. During a participatory action research approach, the researchers looked at the role of biodiversity within the coffee farms and the impact on food security. Specifically, they chose 79 households who had participated in a proactive project from the cooperative about building out greater diversity in the farms.

‘Agrobiodiversity, represented by edible and nonedible plant and animal species richness and abundance as well as management practices, was surveyed within four main systems: coffee, maize and bean plots, home gardens, and livestock. Diversity of edible species in these land use systems was documented based on number of distinct edible plant and animal species, and varieties in the case of maize and beans, reported by farmers via the household surveys.’ (Fernandez and Méndez 2019)

The team found a strong correlation between farm diversity and ‘thin months’ of food scarcity; citing that as the number of trees, and variety of species increased, the months of food insecurity decreased.  Additionally, the health and yields of the primary crop, coffee, increased. Farmers who added maize and bean crops were the ones who became the more food secure, and those who planted grains could also sell it at a regular price, buffering out the volatile coffee pricing they were receiving.  Certainly I have personal experience of this result on our own cacao plantations, and have biodiverse plant and animal husbandry set up as part of our cacao farmer training methodology for exactly this reason in our current research.

Farmer health is in danger from food insecurity, which can impact their ability to do the work needed to generate incomes.

TheFood and Agriculture Organization of the United Nations (FAO 2018) has stated the global targets for childhood stunting to be 14.7% and in research by my professors at University of Sydney, Merrilyn Walton and David Guest of the last years (Professor Merrilyn Walton 2018) , Bougainville cacao farmer village data shows that over 50% of the population studied demonstrate a clear danger level in stunted childhood growth. In the State of Food Security and Nutrition in the World 2018, the researchers note that there is a rise in world hunger, and that the absolute number of undernourished people has increased from 821 million in 2017, from around 804 million in 2016. The last three years has shown a consistent trend in hunger. 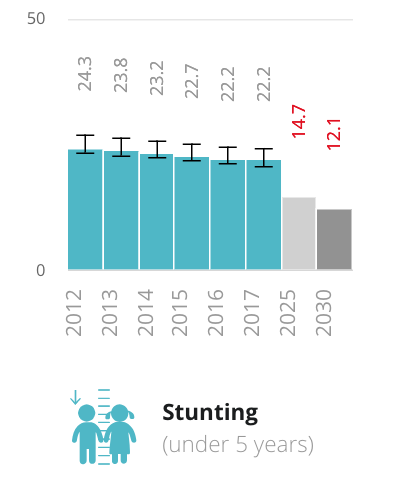 Food (in)security is demonstrating already impacts in this next generation who could likely struggle to grow into strong members of their family and community. Illness was common with over a third of children under the age of five needing health care, most of them carried to hospital by foot, within the last year of survey and presenting with symptoms of cough, fever and diarrhoea. Parents were also seeking a remedy to their ailments, with over 25% of men and 14% of women being treated for malaria in a hospital within the last half year, and also suffering cough and fever, which in the region is associated with tuberculosis.

Cacao farmers often do a visual inspection of trees to identify diseased pods or find presence of pests. With vision problems and joint/back pain, it is difficult for these farmers to move around their farm easily and spend the 2 hours a day p/hectare to grow their plot.

2 hours a day is estimated ( (McMahon, Purwantara et al. 2010) , (Konam 2011) ) to be the time required to actively manage pest and disease control in a hectare of cacao farmland, with the following routine maintenance being proven to contribute to growth of the farm.

The research from the team has been specific and extremely valuable contribution to the science regarding how to identify health and plant pathology barriers that stand in the way of farmers being able to be productive, profitable and sustainable. In his many research into cash crops in Africa over the last decade, Roger Leakey’s research echoes a similar sentiment, that the best solution to land degradation and poverty is in improved crop husbandry and focused income generation (Leakey 2018) (Rrb 2017) .

In the very influential "Global Syndemic of Obesity, Undernutrition, and Climate Change: The Lancet Commission report",  (Swinburn, Kraak et al. 2019) the authors called for tools to:

‘Strengthen accountability systems for policy actions to address The Global Syndemic and create sustainable and health-promoting business models for the 21st century to shift business outcomes from a short-term profit-only focus to sustainable, profitable models that explicitly include benefits to society and the environment’.

The report also calls for double-duty or triple-duty interventions to address the key health and climate issues affecting people, and thus this current research brings together health, wealth and agroecology as the three-point arrow to really address the effectiveness of industry and governmental funding towards farmer training and match them to specific and helpful contributions to true sustainable cacao farmer futures. Certainly what I am focused on in our research on cacao farmer training. Stay tuned for updates!

In summary, the South African research showing that farm workers are in danger of food insecurity and need shop and farm owners to help connect them to resources. That coffee farmers in Mexico have been able to buffer their own food insecurity with biodiverse cropping and that the Bougainville example shows that health impacts of farmers can run deep and directly impact their ability to do their job.

Cross-disciplinary work is needed to address these issues which run from economics to agri-planning, social development to public health planning. Humbly with my research together with a great team, we hope to address and learn more about the issues at hand. We are 100% open to feedback and input from other organisations in the field!