My father, a rubber farmer in Papua New Guinea always saw himself as an innovator. His self image was that of trail blazer and creator; his choice of between our rubber trees was a choice of soil enrichment and land coverage. He was schooled until early teens and in my eyes, is still one of the smartest people I ever knew. Ironically he called it ‘street smarts’ and although our property was dirt roads and the nearest streets half an hour drive away, it was his way of saying innovative. 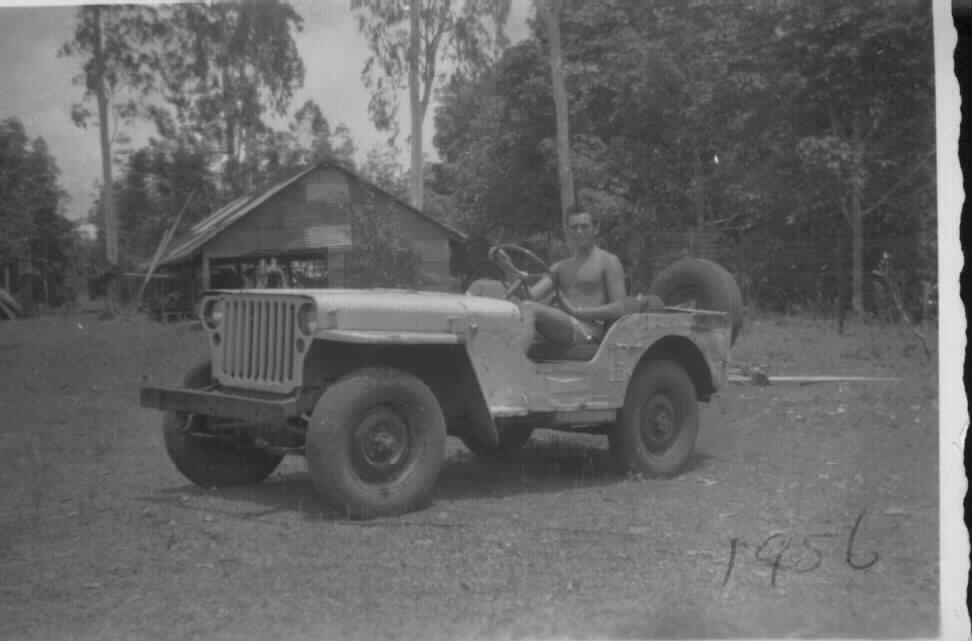 Picture 1: My father, Robert McDonald on the day he took over our family plantation from his father. This Jeep was his ‘fully imported American convertible’, not just a work car. Every exciting tool had a name and a place in our rubber farm.

Working in cacao industry today, I see that same delight in farmers in Mindanao and Bougainville, however science and extension services do not seem to be leveraging those ‘street smarts’ as much as can be.

Since the 1980s there has been a small field of research focused on finding, celebrating and learning from farmer’s ‘street smarts’ (2009) , called Farmer-First approach to working with land owners and traditional farmers to co-create ideal farming processes and methods (Stifel 1990).

In their research about innovation in agriculture, (Biggs 1990) outlined two core predominant types of information flow between farmers and stakeholders, both indicating a top down approach. 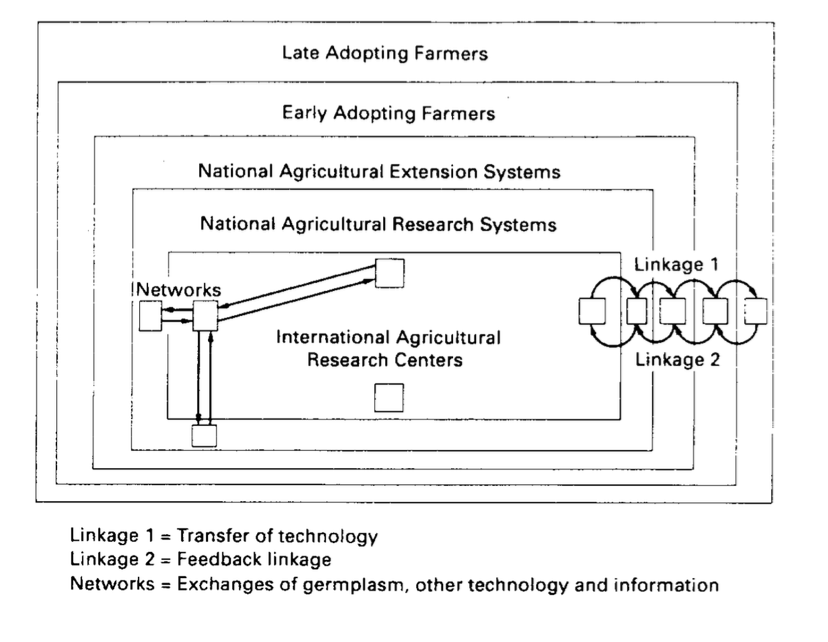 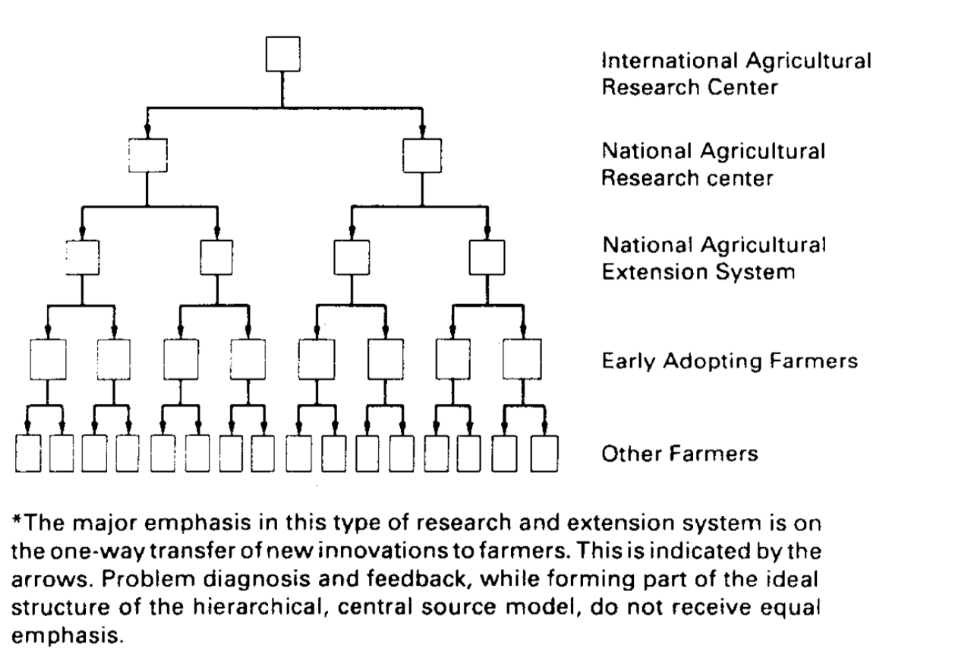 What these models ignore is the ‘street smarts’ of farmers and also the role of indigenous knowledge from a community or region. Additionally, the role of informal exchange networks as a method for transferring knowledge.

There is significant literature to suggest that most farmers get their source of information and ideas from other farmers and training, for example in small farmholder technology adoption (Moser and Barrett 2006) , influence of extension services in agriculture (Dercon, Gilligan et al. 2009), and how collectively,  it impacts food security (Sulaiman, Smith et al. 2018).

Food Security Journal recently published a lack of connection between individuals / institutions who can help in bridging information gaps in a village environment. (Claasen and Lemke 2019) reviewed data in context of food security and highlighted the role of farmers (and shop owners) as actors who function as knowledge bridges within a community.

Classen and Lemke’s research demonstrated how farmers and shop owners are hubs off knowledge and information sharing as below. 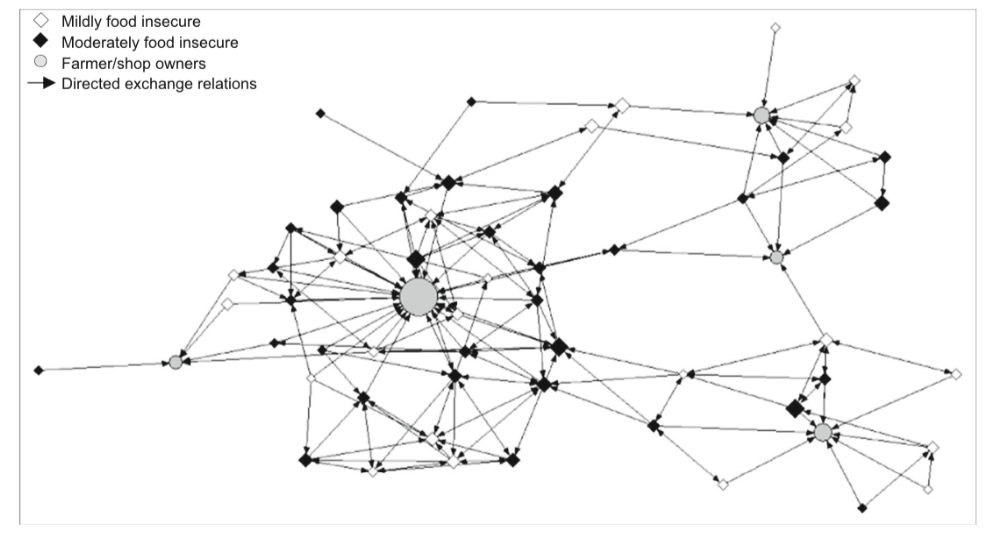 Certainly, has having built cacao nurseries and farms myself, I see the role of a farm as a gathering place within a community, even more-so in times of food insecurity (as the Classen et al research outlines).  Indeed my father saw himself as farm owner, a type of father figure for the village, which sometimes left him feeling burdened, and other times very proud. It is not in the scope of this short post to discuss whether it is ideal or not, rather, to reflect that the role of a farmer and their sense of innovation and leadership can be a great source of strength in a community.

‘Our whole network analysis showed that farm owners and shop owners held dominant positions within the network structure, particularly with regard to potentially providing financial support. Relationships on commercial farms are characterised by paternalistic structures exerted by farm owners, with farm workers depending on employment and social support, which is deeply rooted in the historical context. Paternalistic structures largely continue to exist, despite protective legislation for farm workers aimed at shifting these power relations,’ Claasen and Lemke 2019.

Looking back at the structures and flows of information as the wider group of community and food stakeholders look, the more integrated models which take in indigenous knowledge, involve farmer ideas and innovations as part of scientific, NGO and governmental policy development can be considered credible.

Below is the final figure from the research from Biggs et al which evolves a more encompassing conceptualisation of information flow. 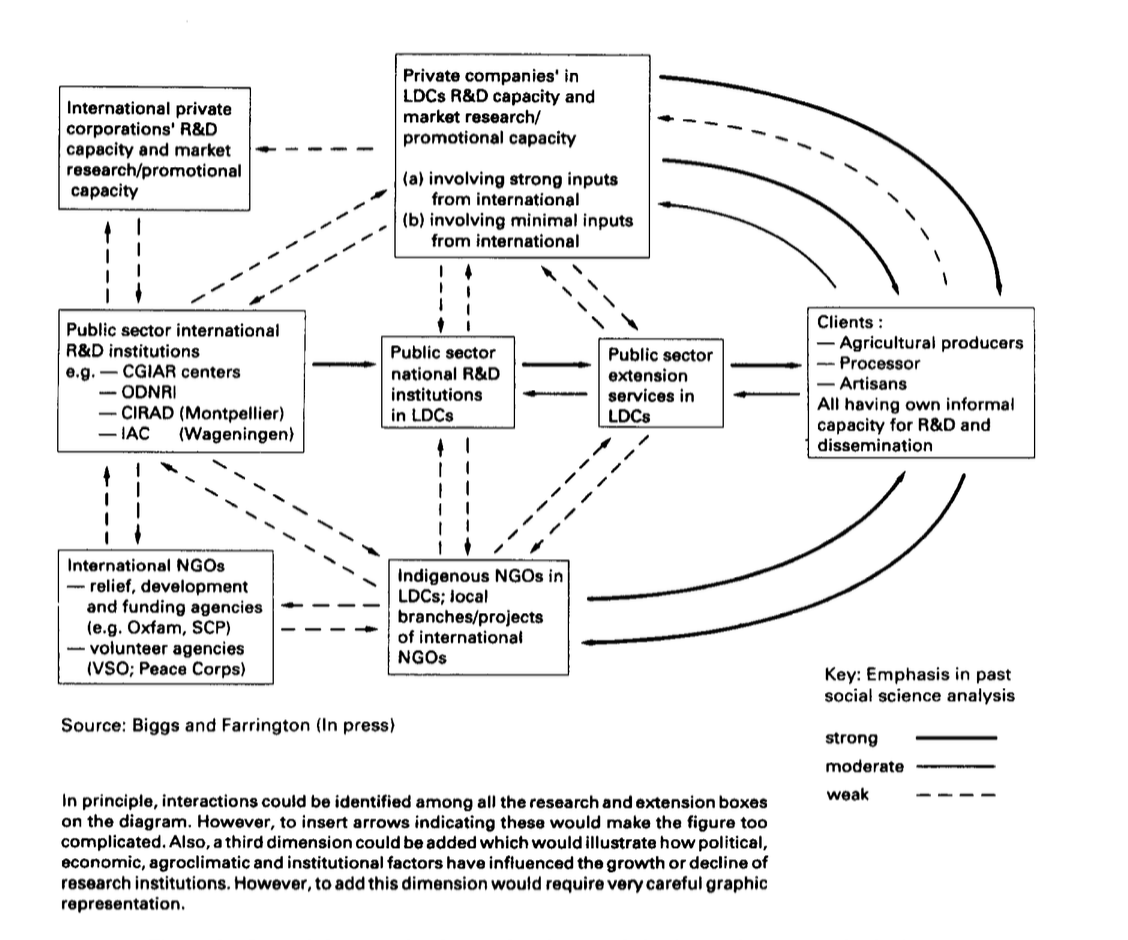 In conclusion, there is evidence to suggest that farmers have a source of knowledge, and a role in community for leadership. Developing this further for a more two-way feedback to stakeholders, as well as empowerment for farmer’s to disseminate knowledge would be beneficial in agriculture and community development.

What is your opinion about the role of farmer innovation? Both in terms of addressing food and farming issues, as well as their leading role in a community ?